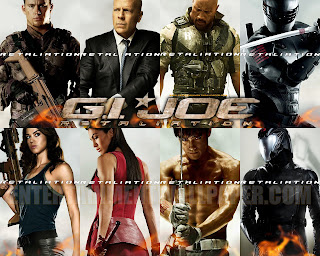 I come watching this movie with high expectation but I felt a bit sad as I think it didn't delivered to my expectation.

Let's start with the good part first. The good point is that this movie is action-packed to the max. In fact, the ninja mountain fight scene is one of the most awesome fight scene I've ever seen. Bringing The Rock in was a good idea, he's such an charismatic and likeable guy. I think the producers copied the idea from Fast5, whereby adding The Rock took the franchise to another level. I like the part where the Rock cheated by using a machine gun with Duke and mostly, the "I hate ninjas" scene where the Rock and Snake Eyes locked on each other with guns. So you see, a lot of good scenes revolve around him. He can easily steals the scene, even from Bruce Willis.

The part where Zartan forced all Nations to fire all their nukes and detonating them was crazy yet brilliant. It sort of makes you think back, with all Nations wanting to safeguard their own interest, sometimes you really need drastic measures to save Earth to be Nuke-free.

Now for the bad part.Perhaps the movie was too focus on the action that it neglected the story line. This was suppose to be a continuation from G.I. Joe Rise of the Cobra. And yet, the movie didn't explain what happen some other characters from the 1st Movie, E.g. The Baroness, Ripcord, Scarlet.

Cobra Commander as Cobra's leader was not given enough role as a big part of screen time was given to Storm Shadow instead. I think the way they build up the story about the relationship between Duke, Baroness and Cobra Commander in Rise of Cobra was quite good. But then in this sequel, they just throw this part down the drain. No wonder Joseph Gordon Levitt didn't reprise his role.

Duke's death was like as if the actor asked for a raise and the Director decided to kill him off. It's sort of reverse climax to kill off the main character of the 1st movie. But even if you want to kill him off, I think he deserve a more epic, self-sacrificing death.

And then, when they reviewed that Zartan was actually the killer of Storm Shadow's Master was my most WTF moment in G.I. Joe history. That would mean that Zartan was very very old, secretly knows enough Ninja skills to teach Storm Shadow and he's doing it without Cobra's order as Cobra was not established yet! Yet another good storyline from the first movie throw the drain.

Another lacking thing in this sequel is the lack of high-tech weapon or vehicle, if compared to the first movie, as this is one of the most important features in G.I. Joe comics. In the first movie, we have Cobra Venom that eats steal, super soldier suit, underground vehicle driller..etc. Ok now I get it, because in this sequel, Destro the weapon specialist, was left in in prison, so no one was in charge of developing new cool weapons.

Then again, G.I. Joe is a multi characters movie and this sort of movie is hard to pull off as you need to give equal screen time for each character. I do look forward to a third sequel, but I hope that they would put more effort in the storyline.

Can I request to have the awesome mobile command centre in the next film? 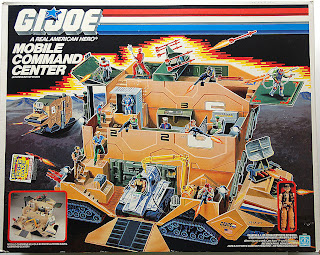